Museums house artifacts of historical, artistic and cultural significance, providing visitors a unique opportunity to catch glimpses into the past.  The Cleveland Museum of Art, however, allows you to catch a literal glimpse into the past.  It stands to reason that a museum filled with treasured items would be haunted.  But the Cleveland Museum of Art has taken this to an extreme.  It is allegedly home to several spirits, and has been dubbed one of the US’s most haunted museums.

This week’s topic isn’t a library or a bookstore or directly related to books, but museums share many of the same values as libraries—primarily the preservation and sharing of information.  This information doesn’t have to come in the form of books.  Art, artifacts, memorabilia—all these items provide invaluable insights into the past, present, and even the future.

Now that I’ve justified talking about a museum, I can dive into the nitty gritty of the haunting.  Or should I say, hauntings.

If you stand in front of an artwork that was beautifully painted by an Impressionist, you might feel captivated, at a loss for words, and have an overwhelming desire to escape into that world of pastel shades and blurred reality. But what if it were possible that the subjects of these paintings could come to life?  No, I’m not describing The Night at the Museum, but what many visitors and employees claimed to have experienced while roaming the halls of the Cleveland Museum of Art.

A little boy has been seen racing around the corridors of the museum. He looks remarkably like the little boy from the painting in one of the galleries.  He’s even wearing the same unique style of dress.  Before we get all excited about the proven existence of a ghost, I want to add a caveat.  There have been “numerous” reports of this little boy.  I put “numerous” in quotation marks, because I haven’t found any unique posts by individuals claiming to have seen it, just news articles and blog posts stating that “numerous” people have seen it. Is this simply spreading a rumour? How many is “numerous”?

A mysterious “man in grey” has also been observed standing in a hall watching museum visitors, before vanishing or stepping into a painting. The painting in question is the portrait of Jean Gabriel.  I find it peculiar that this story is very similar to that of the little boy.  My question is: Is this the spirit of Jean Gabriel, or a spirit that has manifested itself out of his likeness?  Does it not seem odd that two spirits would be haunting their portraits, clothed in the same style of dress?  Or is it the same spirit that takes the shape or form of the subjects of nearby portraits?

There is also a haunting associated with a large ornate mirror that adorns the wall of one of the galleries.  Museum guests have claimed that they have stood in front of the mirror and seen someone standing behind them.  I couldn’t find a description of who was standing behind them, or if there was a similarity in the appearance of these sightings. 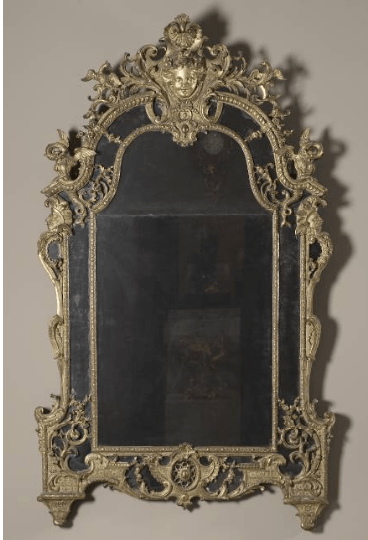 The ghost of William Mathewson Milliken, Director of the Musuem in 1930 has also allegedly been seen, despite the fact that he retired in the 1950s and died twenty years later (Seeks Ghosts). These four mysterious cases are all very hard to corroborate, given that there are no specific details provided. Did everyone truly see the same thing, or were the inconsistencies of the stories glossed over because of convenience?  The next two sightings are specific to an individual experience, so I’m more inclined to give them credence.

A local news reporter visited the museum and took some pictures at night.  One of these pictures depicts her standing in front of the Colossal Head of the Deva.  But the reflection of the Head on the glass looks remarkably different from the Head itself. The mouth is open, just like mine was after I saw her picture.  Check out the official news article at the Cleveland 19 News website.  Do you see it too? Is the mouth open? Is it just a trick of the light, or is the Colossal Head of the Deva trying to tell her something? Tell me what you think in the comments.

I’ve saved the most intriguing sighting for last, because it’s of my favourite Impressionist.  Claude Monet has been seen haunting the halls of the museum.  During the construction of the “Painting the Modern Garden: Monet to Matisse” exhibition, a man was seen standing on a higher landing, gazing down upon the lobby.  A staff member took a picture, which many agree looks a lot like Claude Monet.  Apparently, nobody was up there.  Take a look at the picture from the original Today.com website article.  Do you think the image was photoshopped?  This sighting happened close to Halloween. Is it possible that this is a Halloween prank? Was the Museum trying to increase foot traffic in their exhibit by advertising a ghost?  Or maybe one of the staff members was caught trying on their Claude Monet costume?

There are so many sightings of spirits in this museum that it’s almost unbelievable based on this fact alone, unless there’s something about the building that brings these spirits to life.  Is there an ancient artifact, like the tablet of Ahkmenrah in the movie The Night at the Museum? Is the museum equidistant from all five elements, resulting in a convergence of the spirits? Or is there toxic mold that causes everybody to hallucinate?  Until paranormal investigators take a swing at solving this mystery, we might never have concrete evidence. But I do think that this museum is a good place for someone to go if they want to see a spirit, since after all, there are a lot to choose from. Who’s up for a road trip?

I’m a librarian, writer, and fridge magnet connoisseur living in Saskatoon, Saskatchewan, Canada. In my spare time I haunt deserted cemeteries, lose my heart to dashing thieves, and crack tough cases, all from the comfort of my writing nook. For book reviews: follow PowerLibrarian For my writing: follow Helen Power.ca For spooky stuff: follow BibliOccult View all posts by Helen

This weekend I wrote a short story that just might be my best one yet! I’m on a writing high. 🤓 I decided to experiment with epistolary style, and I'm really glad I did. The story was inspired by an anecdote told at the haunted walk I went on last fall. Gotta love spooky history at nighttime! 👻 . . . . . . . #amwriting #amwritinghorror #horrorlover #horror #writerslife #authorslife #writing #writenow #cemeteries #writersofinstagram #authorsofinstagram #horrorwriter #horrorauthor #windsor #canada #ghostwalks #darktourism #spooky #scary #history #historylover
What does your horrorscope bring? 😈 . . . . . . . #horror #horrorfan #bookstagram #amreading #booklover #bibliophile #currentread #goodread #booknerd #bookworm #horrorlover
Happy Halloween! This month's blog post is coming a little earlier in order to celebrate this unholy holiday. 👻😈👻 Last year I read Jay Anson’s Amityville Horror: A True Story around Halloween. I listened to the audiobook during my commute, because I thought it would be the perfect story to get me in the holiday season. At the time, I wasn’t crazy about it. I thought the writing was a little stilted, and the plot was far too outlandish to be within the realm of possibility. However, I’d had no idea of the context in which this book was published. I’d had no idea that this book was originally marketed as a literally “true” story… 👻👻👻 Read the full blog post on https://biblioccult.wordpress.com/ (link in bio) . . . . . #horror #amityville #horrormovies #truestory #amreading #amwriting #scarystories #scary #spooky #ghost #ghosts #haunting #haunted #hauntedhouse #haunt #paranormal #supernatural #ghoststories #halloween #happyhalloween
Picture hanging at the Leddy. It’s always hanging crooked. Ghosts? 🤔 . . . . #ghost #ghosts #library #libraries #librariesofinstagram #history #historylover #spooky #haunted #booklover #book #books #bookstagram #bookish #art #artlover
I found this gem in a bookstore and I'm seriously regretting not buying it. It looked like a real armchair thriller! . . . . . . . #bookstagram #book #books #booknerd #amreading #booklover #bookworm #bookaholic #horror #horrorbooks #horrorlover #instabooks
🚨The hiatus is over! 🚨This is not a drill! A new BibliOccult blog post is ready for your reading pleasure. This month's blog post is about the supposed haunting of Browse Awhile Books. This bookstore boasts enough ghosts that they could start their own book club. And from the sound of it, they would be a rowdy, chatty, and somewhat vindictive group. So, it would be just like your typical book club. 👻☠️👻 Read the post here: https://biblioccult.wordpress.com/ (link in bio) 👻☠️👻 . . . . . . #bookstore #bookstores #haunted #ghosts #spirits #supernatural #paranormal #paranormalactivity #scary #spooky #book #books #amwriting #ohio #wanderlust #travel #amreading #horror #hauntings #humor #newblogpost #bookworm #booknerd #booklove #bookstagram
Conspiracies Curses ghosts Haunted Bookstores Haunted Libraries haunted museums Mysterious Books The Unexplained Welcome writer
%d bloggers like this: